David Beeby grew up on a mixed farm in Nottinghamshire where his family have farmed for over 150 years. The youngest of 5 he qualified as a Chartered Accountant and then moved in to industry.

Following a number of moves in to general management within the printing and packaging industry he relocated to Cumbria in 1987 to run (what was then called) Smith Brothers (Whitehaven) Limited. He progressively moved into international roles within the group that owned the business. In 2004 he moved to run Innovia, headquartered in Wigton. In his time a major investment was the building of a brand new plant in Wigton to make the polymer banknote substrate to supply the Bank of England. He retired from running the business in 2015 at which time there were manufacturing sites in Wigton, Belgium, USA, Australia and Mexico. The business was sold to CCL Industries in 2017 and David was delighted to be able to maintain his contact and interest in the business by becoming an advisor.

In addition to his business career David has been involved in a number of charitable roles including Chair of Princes Trust in Cumbria and member of the Management Committee at Calvert Trust. He is currently Chair of Trustees of Cumbria Community Foundation. He is also Chair of Cumbria CBI and involved in working with a variety of companies, most notably as Chairman of Aqua Power Technologies Limited.

Tim Cartmell has served Cumbria in the voluntary role of Undersheriff since 2013. Born in Cumberland, Tim read law at Cambridge and spent the next 40 years as a Carlisle solicitor. He is also a trustee and vice chair of Cumbria Community Foundation.

As Undersheriff, Tim has a vital role in providing wise counsel and continuity. He brings knowledge and considerable experience of all things relating to protocol and ceremonial matters which is a huge support to each High Sheriff in office. 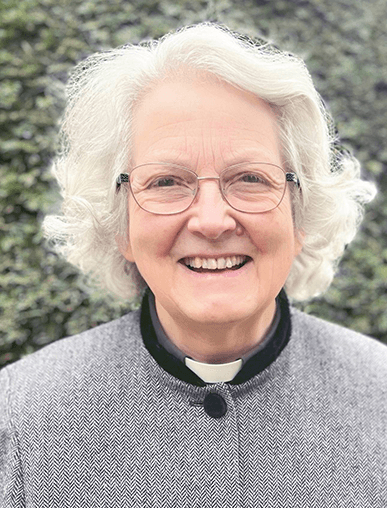 Cumbrian born and bred Clare Spedding has lived and worked in the county almost all her life.

She left Cumbria to take a degree in Sociology at Durham and since then has been based at Mirehouse, Keswick with her husband John where they brought up two sons. Mirehouse was opened to the public in 1981 and she ran this until 2005. She served as a magistrate and as governor of several schools and was involved with her husband John in the early days of the Calvert Trust. For some years she was privileged to be a Trustee of the Francis Scott Charitable Trust and in that role learned much about the wide range of voluntary work carried out throughout the county. She was a lay member of the Chapter of Carlisle Cathedral until 2005 and after ordination has been a member of the ministry team in the Binsey Parish for ten years.

She is honoured to be David Beeby’s chaplain for the next twelve months as he continues his valuable contribution to the life of the County in the role of High Sheriff.

The Office of High Sheriff of Cumbria

The county of Cumbria was created in 1974. Cumbria is made up of the former shrievalties of Cumberland and Westmorland as well as former parts of Lancashire and the West Riding of Yorkshire.  Below is a list of the previous High Sheriffs of Cumbria.

I hope you find the information in this website both interesting and informative. You may like to visit The High Sheriff Association to learn more about the Office of High Sheriff  www.highsheriffs.com

You can find out more about which cookies we are using or switch them off in settings.

This website uses cookies so that we can provide you with the best user experience possible. Cookie information is stored in your browser and performs functions such as recognising you when you return to our website and helping our team to understand which sections of the website you find most interesting and useful.

Strictly Necessary Cookie should be enabled at all times so that we can save your preferences for cookie settings.

If you disable this cookie, we will not be able to save your preferences. This means that every time you visit this website you will need to enable or disable cookies again.